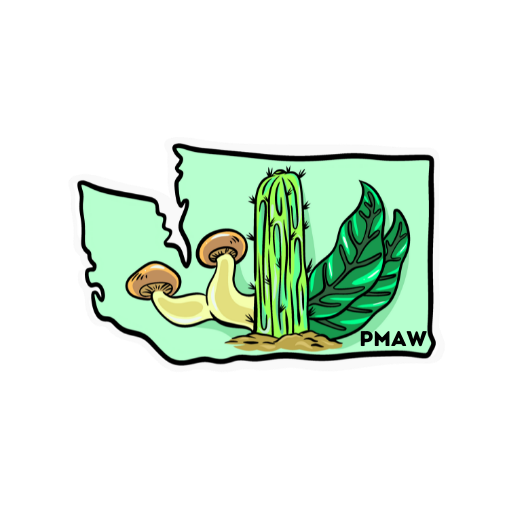 If you made it here, that means you must be pretty curious about what we aim to do in Washington state. If the word “psychedelic” scares you at all in any way, we want to invite you to please read this page with an open mind. Our intentions are solely to share with you current facts and historical information so that you can make a more informed decision for yourself on this issue.

We are working on drug policy reforms that will reintegrate psychedelics (also known as entheogens) back into our communities with a focus on safety administered and affordable access.

We will achieve this with two main strategies: undoing the harmful policies fueled by the war on drugs, and pushing for safe and responsible regulatory policies that center equitable access for everyday working class people to afford these medicines. We also advocate for reform in regulatory frameworks  in order to  promote participation from small businesses. Currently, regulation and the bureacracy that follows it, tends to benefit people with access to lots of capital. Through regulatory capture, larger corporate operations are able to create markets dominated by a handful (or less) of companies that reap most of the profits. Cannabis reform suffered from this pitfall.  The burgeoning market on psychedelics may face the same fate if we do not actively mitigate this. Washington and Oregon have a real opportunity to reintegrate psychedelics back into our communities for therapeutic, spiritual and personal use in ways that are egalitarian and help fuel local small business opportunities in rural and urban areas.

We believe that entheogenic substances have always been and will continue to be of great benefit to humanity – we in the Western world are just re-awakening to their medical, spiritual, therapeutic and personal potentials. The psychedelic renaissance is in full swing, and rescheduling and/ or legalization is on the horizon. If we do nothing to ensure equitable access, then the current powers that be will ensure that the same inequities will play out with regard to regulation and access to these sacred medicines.

Why should we decriminalize entheogens that are currently Schedule 1 Controlled Substances?

Psychedelics are proven to help with many mental health and behavioral health issues.

We acknowledge that current conventional medical treatments are not enough for many people dealing with chronic mental health and substance use issues. Preliminary clinical trial data are showing that treatment resistant depression symptoms were effectively reduced for several months following just one or two treatments with psilocybin. Recent phase 3 clinical data for MDMA for PTSD was recently released in the Nature Medicine journal showing a 67% reduction in PTSD symptoms after just three sessions. There are also studies underway to determine the efficacy of psychedelics with treating substance use disorder (addiction). For the medical reasons alone,  we must fight the stigma created by the war on drugs and create pathways to access these alternative psychedelic medicines and their synthetic derivatives for the sake of our community wellbeing.

As a nation we are struggling with the worst epidemic levels of addiction in our history – all exacerbated by the global pandemic. These diseases of despair are issues concerning public health and should never have been treated as crimes in the first place. Another unsavory but true fact is that Drug War policies disproportionately impact people of color, and particularly black people, and are most enforced in under-resourced communities. This is true for both urban and rural areas. Our policies essentially treat people with mental illness, unresolved trauma, or addiction as criminals instead of treating them with compassion and offering resources to help them with their unfortunate circumstances. This is an injustice that we must bring to an end.

Furthermore, natural psychedelic plants and fungi have been utilized safely for thousands of years primarily as part of sacred ceremonial practices of indigenous tribes around the world. The Mazatec of Mexico have used psilocybin for literally thousands of years. Iboga is part of sacred rights of passage in Gabon. Hundreds of tribes utlizize Ayahuasca throughout South America for community wellness and unity. Even in our own backyard, the Huichol and the NAC tribes in the southwest of the US and northern Mexico utilize peyote as their sacrament. Human beings have been in deep relationship to psychedelic plants, and the natural environment, for millenia. This is infact ancient living wisdom and this knowledge and wisdom continues to be stewarded by indigenous communities to the present day.

We believe that humans should have the sovereignty to decide what they put into their bodies. We also believe in protecting religious freedom and many psychedelics (greek for “mind manifesting”) also known as entheogens (meaning “manifesting the divine within”) are simply naturally occurring plants and fungi that grow all around us. Psychedelic fungi literally grow in Washington state, primarily between November and January. Please don’t be silly and pick or eat any mushrooms that you cannot positively identify!

You’ve been lied to by our Federal Government:

Furthermore these substances were categorized as Schedule 1 without any scientific research to prove that they are harmful or dangerous, as claimed by the DEA. Many substances that are listed as schedule 1 are a direct result of the political climate during the 1960s. The Drug War was created and driven by President Nixon and his administration. Their intent, as revealed by this Harper’s Magazine interview of top Nixon aide John Ehrlichman, was to destabilize the Black led Civil Rights movement and target the leaders of the Anti-war counterculture late. Since they could not blatantly arrest people for being black or being anti-war, they relied on an old tactic of criminalizing behaviors most associated with those groups. This is an old racist tactic that started decades before in the late 1890s and early 1900s with the first laws being passed to criminalize possession of opium and cocaine.  It is this generations legacy and our responsibility to dismantle the harmful policies that we as a society have suffered with the repercussions of for over a century.

Why should we ensure equitable access for all regardless of income?

The hyper focus on profitability has corrupted our medical institutions, incentivizes burdensome and expensive regulatory frameworks, and has created a a situation where many people suffer because they simply cannot afford access to healthcare. This is a rampant issue for millions of Americans. For example, inpatient addiction rehabilitation is often inaccessible due to costs ranging in the of tens of thousands of dollars for 30 to 60 day stays. Insurance is affordable for some well-off people, but remains inaccessible to many working class Americans and people with disabilities. We need to focus on shaping frameworks that ensure access to health care for people who cannot afford to pay hundreds or thousands of dollars to access them. Decriminalizing personal use and cultivation is an inexpensive and accessible way to allow many people to be able to safely and reliably acquire and grow psychedelic medicines. Decriminalization also allows people to hold bad actors accountable as it would no longer a crime to possess these medicines. Criminalization deters people from reporting harm done to them because of the threat of getting a felony.  Growing your own medicine usually costs less than a $200 to get set up.  It is time we bring the underground community to the broader community.  The emergent organizations focused on training, accountability, professional development and education, coupled with responsible regulatory frameworks for safer and affordable access is the best way to holistically fold these medicines back into our culture.  With proper education and best practices in place, these substances can be used by people responsibly and effectively.

Are Entheogens Harmful? Won’t they make you go crazy?

The risks and harms are varied and they largely depend on the substance, the amount ingested and the frequency of use. What can be said for certain is that

In the Netherlands psychedelic substances have been legal for personal use for decades – people safely engage with entheogens everyday. When Portugal decriminalized drug consumption in 2001, they saw a remarkable turn around in addiction and positive outcomes when they chose a treatment centered approach versus a prohibition & punishment centered approach.

Our Commitment to the Residents of our State:

We are committed to working with civic leaders, community leaders and residents to develop an educational framework and ethics centered on harm reduction and best practices relating to psychedelics.  This will ensure all residents will have the opportunity to be well informed. These educational programs will cover:

These trainings will be provided in a culturally relevant way, and will focus on empowering residents from within their community to lead so that the knowledge can be carried forward from within. This model is based on Decriminalize Nature Oakland’s proposed ordinance: OCHI (Oakland Community Healing Initiative).

A note on sustainable and humane use of entheogens:

PEYOTE / PEYOTL: Cultural traditions that are available in one community or in certain geographic areas may not scale appropriately for the demands of a global market. PMAW respects the request of the Native American Church(es) and the Indigenous Peyote Conservation Initiative, for the time being, not include peyote in decriminalization or legalization policies, bills or initiatives. Peyote is a slow growing plant endemic to a small area in northern Mexico and southwestern Texas. It takes on average 10 years for a peyote button to be large enough for sacramental use. The NAC fought many decades to regain their right to use peyote as part of their religious tradition – which was a result of racist Federal laws passed to destabilize indigenous communities in our country, and force the to assimilate. There are many examples of historical and ongoing indigenous erasure and oppression in federal, state and local law. We will not participate in this erasure by ignoring their requests, and instead we want to empower and uplift native communities to continue to steward and shape policies that primarily affect them. We hope that fostering a continued relationship with indigenous communities that utilize peyote will lead to stewardship that promotes the longevity of the medicine, and perhaps in the future could broaden access.

Sustainable Foraging and Cultivation: We urge that cultivation be used whenever possible. When foraging, ensure that you do not wipe an area clean of fruiting bodies or plants. We want these plants and fungi to be available for future generations in the wild, and over-harvesting could become a major issue if people are not mindful of their impact when foraging. Leave more than half of what you find in nature, and check to see if an area has already been harvested (look for stem butts, and torn up duff/earth). If you see signs an area has already been harvested and picking looks lean, please keep searching.

Animal-derived psychedelics: We believe that synthetic sources for 5-MEO-DMT, Kambo and other animal derived psychedelics are preferable. Global demand causes inhumane treatment of these sacred animals, where animals are treated like commodities instead of sentient beings.

We believe in informed consent instead of top-down models of gatekeeping information. Free and low barrier access to accurate information is so that you can make an informed decision for your personal health needs.

We are looking for our statewide champion who will help us draft legislation to decriminalize entheogens and eventually legalize them for sale for medical, research, religious and personal uses.

I’ve really been interested in helping more people design ecological regenerative sustainable micro-industries — small businesses that, in the work of doing that business, help to regenerate the ecosystem. And are also ethical. I found that with mushrooms, and urban gardening and algae cultivation and all that kind of stuff. All things that I feel like would be beneficial and can help people make money — all at the same time, which I think is super-necessary.

We need your help to get our resolution adopted by this fall and to change laws in Seattle to protect individual and community use of psychedelics!